23/May/2003 - 28/Sep/2003
The Hungarian word ősfoglalkozások, literally 'ancient occupations', was coined by Ottó Herman (1835-1914), a leading figure in Hungarian ethnography to denote fishery and animal herding as they were traditionally practised in Hungary long ago. It was Herman's opinion that only through a familiarity with the fastfading remnants of these traditions could a researcher of ancient Hungarian history truly understand the origins of his people. As he put it, 'he who does not recognize the earliest elements of traditional culture in the Hungarians of today will search in vain for the nation's ancient homeland, or more properly, for its origin, and the process of its development'.

Each of Ottó Herman's highly influential books and exhibitions included a rich array of visual material depicting the 'ancient occupations' of the Hungarian people. His books and articles were illustrated partly with drawings of his own and partly with the works of artists whose services he enlisted especially for this purpose, most frequently János Jankó (1893-1896), István Nécsey (1870-1902), Jenő Koszkol (1868-1935), and Elemér Vezényi (1879-1967). The paintings and drawings they produced were displayed at the 1896 Millennial Exhibition, and the Paris World Fair of 1900, where Herman also took ten large scale watercolours created for the occasion by Jenő Koszkol to depict scenes of the ancient trades of the Magyars. Herman later commissioned other similar works from his colleagues.

The exhibition displays the paintings of ?ancient occupations? commissioned by Herman, generally created for specific exhibitions of the period and, for the most part, long forgetten. Among the works are some of Ottó Herman?s own sketches and drawings, of interest not only for their thematic content, but also for what they reveal of the relationship between scientific research and visual illustration in the late nineteenth century. A smaller number of the works on display here was created for the purpose of documenting the collection of scientific data.The majority of Ottó Herman?s work were, in fact, of this nature, as were a portion of the works of István Nécsey. However, most served rather to demonstrate or to illustrate different theories. The works colleted for this particular exhibition all formed an integral part of constructing ethnological knowledge, providing illustrations to accompany thematic analyses written for scholarly publications. Often, this was so much the case that a given drawing might even serve as factual evidence for the validity of a statement lacking support in terms of known historical data. 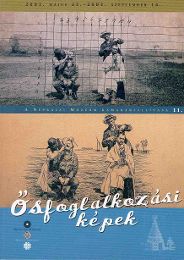