1/Jun/2005 - 30/Oct/2005
This exhibition presents a selection of ornaments worn on the body or clothing by 19th- and 20th-century Hungarian peasants, shepherds, and various rural social groups.

Covering all areas with a Hungarian-speaking population, the exhibition divides folk jewellery into two thematic categories, based on form and function. In terms of form, the adornments favoured by Hungarians living in the centre of Europe (with the exception of the northern peripheral areas) reflected the humbler, less pretentious realm of possibilities associated with Western and Northern European climes. Form and structure in craftsmanship are illustrated by means of subdivision of the material into stand-alone pieces and decorative elements used in conjunction with clothing. Stand-alone jewellery is associated with a particular area of the body, with some types worn directly next to or affixed to the skin, and others lain over, but not attached to, the clothing. Jewellery belonging to this group includes four basic types: headpieces, necklaces (and especially beaded necklaces), belts, and jewellery worn on the arms, wrists, or hands. Ornaments associated with clothing were generally either sewn, pinned, or laced onto a particular article of the wearer's wardrobe. Hungarians wore four basic types of ornaments that might be loosely described as jewellery: pins, belt buckles and strap clasps, hooks, and buttons.

The second section of the exhibition presents jewellery in terms of aspects of function. Ornaments forming a part of the Hungarian folk costume incorporated particular materials, forms, and decorative motifs, were worn in specific ways, or were endowed with meaning or magical properties so that they might serve various purposes. While many did emphasise various lines or features of the body, most were not simply decorative in nature. Some might mark the age, marital status, wealth, or social rank of the wearer, while others served as a sign of one's religion, nationality, or occupation, and still others indicated the nature of the special occasion for which they were worn. As many folk beliefs involving protective or healing properties also surrounded the wearing of jewellery, some pieces performed a magical function in addition to the decorative one. Finally, as accessories of the peasant wardrobe, virtually all ornaments served the practical purposes for which they were designed. 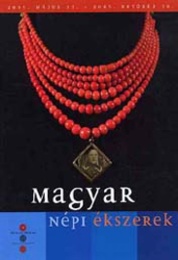