The Renaissance We All Know and Love 15/Nov/2008 - 27/Sep/2009
The exhibition seeks to rethink the relationship between folk artefacts of the 18th and 19th centuries and the age of the Renaissance. By expanding the existing interpretive framework, the exhibition attempts to refine previous research findings and re-evaluate the relationship between the "flowering Hungarian Renaissance" (a period in folk ornamentation that has received considerable attention in the professional literature) and the nation's folk art. The exhibition's primary purpose, in fact, is to question the generalised notion that the Hungarian Renaissance, derived from the Italian, has enjoyed a continued existence within the folk art medium.

While the title of the exhibition, Legendary Beings, Enchanting Flowers..., suggests a presentation dealing with the history of motifs, the final product is, in fact, an investigation that uses the identification of motifs to reveal the history of the artefacts themselves. In doing so, it has also revealed certain fundamental processes, including the role of the guilds in perpetuating knowledge, the rise of the printed image, the manner in which numerous elements of 16th-17th-century court culture, high-noble culture, and European material culture converged over the course of the 18th century, and how these cultural elements entered and gained popularity among the lower strata of society.

To highlight these processes, the exhibition borrows material from other sources, giving the viewer a sense of the various ways in which the phenomena in question were manifested in different social contexts and geographical areas. It also deliberately treats the material of diverse nationalities as a single unit. Finally, organisers found that, no matter how profoundly certain artefacts displayed the stylistic characteristics of the Renaissance, evaluation was only meaningful if pursued within the context of the 18th century, their actual time of manufacture and use.

All told, the exhibition seeks to explore eight topical sub-areas, each of which had a determinative effect on the history of the craft guild. Visitors will find themselves on a journey through 16th-19th-century Europe, nestled soundly within the thematic framework of the mandatory wanderings of a guild journeyman. 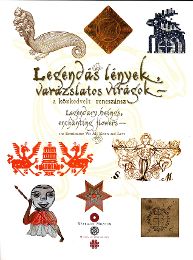 Legendary Beings, Enchanting Flowers
The renaissance we all know and love
0 Ft