For decades, this candelabrum from Máramaros—formerly a county in the Kingdom of Hungary, now a territory in Romania and Ukraine—stood in the Museum of Ethnography’s permanent exhibition, an artefact representing the Greek Catholic denomination that many visitors found particularly eye-catching.  Now, as the institution works to develop its new permanent exhibition, plans are to display this popular 19th-century piece in an entirely new context.

Finely carved with the heads of humans and angels, the candelabrum proved more fragile than over one hundred years of indelicate museum life would have required:  at some point, one of its cherub’s heads was broken off to lie at length in some unremembered location in collection storage.  Then, in the early 1990s, an expert in the restoration of wooden artefacts replaced the missing piece with a freshly carved head and tiny wings that all but melted into the decorative backdrop.  Even more recently, however, a collection audit finally turned up the lost bits that had broken off so long ago.  What should the museum do in such a case:  replace the reconstructed part with the original, or treat the object as an organic whole?  Also, what does a ‘good reconstruction’ look like:  one that goes unnoticed or one that makes clear precisely what has been done?

At the begnning of the 20th century, the rural Greek Catholic communities of Máramaros showed little hesitation in surrendering their old—to their minds, out-of-date—ecclesiastical furnishings and liturgical objects to museums and collectors of antiquities. Church elders used the money received for what they saw as old, frequently dilapidated pieces to purchase new ones that, though mass-produced, were both novel, and more attractive to their communities.

Undertaking the lion’s share of the work involved in salvaging these ecclesiastical treasures was Hiador Sztripszky, employee of the former Ethnography Department of the Hungarian National Museum, the predecessor of today’s Museum of Ethnography. As a result of Sztripszky’s multiple field collecting projects, chests full of 18th and 19th-century hand-carved and painted ecclesiastical furnishings were added to museum inventory. Examples include a number of standing and wall-mount candelabra acquired in the summer of 1909 in Rahó (Rahiv, Ukraine); and specimens from Máramarossziget (Sighetu Marmatiei, Romania), described in his letter to the Ethnography Department director in terms such as ‘three-armed,’ ‘tinted,’ ‘round-based,’ ‘elongated wall-mount,’ ‘large, green, coloured, carved,’ ‘white, painted, single-candle,’ and ‘brown, painted, single-candle’.

The ethnic Hutsul community of Galician Greek Catholics living in Kőrösmező (Jaszinya, Ukraine) erected the church currently standing on the edge of their village—a wood-shingled, steepled, wooden-beam structure dedicated to the Holy Trinity—in 1824. The three standing, three-armed candlesticks Sztripszky bought there are presumed to have come from a set of furnishings that were no longer in use. The three-armed candelabrum is a Greek Catholic liturgical object that plays a role in Easter and Epiphany rites, and though this type of object was also used in local homes, it is unlikely that the ethnographer would have purchased three identical objects from three different homes on the same day.

Sztripszky’s ‘3-armed candelabrum, covered in woven wool threads’ is almost certainly a reference to the artefact seen here: the attached card even makes mention of its human and angel heads, though the ‘wool threads’ are no longer to be seen. The piece falls into the category of Hutsul ‘Trinity/Troica Candelabra,’ symbol of Rusyn ecclesiastical and folk art. Analogous pieces can be found in the great collections of the region: the Ivan Honcsar Museum of Kiev, for instance, counts several among its holdings. It was Oskar Kolberg who, in describing the folk life and music of the Hutsul region, first spotlighted such objects for the purposes of scientific scrutiny. In a paper on the subject, Kolberg describes how, in 1884 in the city of Kolomyja (Ukraine), following the ceremony for Epiphany, the local priest led his congregation—three-armed candelabra in hand—to the nearby river. The researcher proposed that the precursors to these candlesticks may have been the three-branched wax Epiphany candles whose flames priests had once put out in cruciform holes cut in the river’s ice. Since Kolberg, the topic of the three-branched candlestick been one of the most-discussed in Rusyn ethnography.

As for this piece in particular, the three-armed, carved softwood candlestick collected in Kőrösmező was crafted some time during the second half of the 19th century. The piece is unpainted, its decorativeness residing in its intricate, pierced carving and anthropomorphic ornamentation. On its forward-facing side are its carved faces, on the reverse, the backs of the heads of the same figures. The piece’s base and leg mimic those of metal candelabra, its arms growing out of two dynamic, pierced spirals. Hanging from its body are dangling ornaments carved to look like the textile tassels traditionally seen on Rusyn candlesticks.

In most cases, the relationship between three-armed candelabra and the Holy Trinity is merely an associative one. On this particular artefact, however, the three faces appearing below its three receptacles make it all the more concrete: God the Father in the centre, the Son and Holy Spirit to either side. The manner in which the broad-cheekboned Father and his easily distinguishable, long-faced angels are depicted in almost rhythmic alternation makes them all too easy to identify. Their presence contrasts with the characteristic folk art solution seen on two other standing candlesticks in the museum’s Ecclesiastical Collection, both similarly collected in Kőrösmező, whereby the three persons of the Holy Trinity are symbolized by flowers or rosettes.

That the two faces appearing between the arms of the candelabrum are meant to be angels is made clear by their tiny wings. Here, the multiple pairs of wings traditionally belonging to the cherubim and seraphim of the highest order are indicated by the leaves of flowers, thus satisfying the teaching of Dionysius the Areopagite, revered sage of the Eastern church, that only the upper tier of angels could directly see God, all beings of lower hierarchies receiving information through their mediation.

Today, the broken cherub’s head sits next to the candlestick in museum storage. For the time being, the two will remain separate, part of a section in the museum’s new permanent exhibition that examines issues in museum science—in other words, an open question for both institution, and visitor. 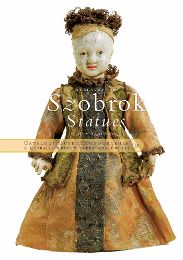