Pääsuke shot photographs and films both in continental Estonia and on the surrounding islands. His legacy of 1300 works now forms a valuable part of the Photography Collection of the Estonian National Museum. One of Pääsuke's greatest undertakings as an employee of the Estonian National Museum was his summer photography tour of 1913. Departing from Narva, Pääsuke and his companion, H. Volter, made the gruelling journey across the northern Estonian coastal territory to the islands of Happsalu, Lihula, Muhu, and Saaremaara. As they journeyed, the pair sent the negatives they produced to Tartu and their glass plates to pre-arranged post offices.

Pääsuke and Volter also collected antiques, while Pääsuke's posted regular letters offering invaluable advice for future collectors. In the end, both the collectors and museum were satisfied with the results: some 300 images of landscapes, folk crafts, folk architecture, and local people. Pääsuke's last great endeavour was his 1914 project to capture the city of Tartu in stills. The resulting 446 photographs offer an intimate look at the city's former structures, in particular those of the city centre.


Pääsuke was conscripted into the army in 1915. Having been discharged and returned home, he died in a train accident in Belorussia in 1918. During the 1990's two exhibitions bearing his name, 1913: J. Pääsuke on the Islands and Johannes Pääsuke: 100 Photographs, travelled the length and breadth of Pääsuke's home country of Estonia. The present exhibition commemorates the 110th anniversary of Pääsuke's birth. Though presentation of the material builds on the artist's own technique, it also takes advantage of the possibilities of modern technology: photographs are enlarged to ten times their original size and tinted brown, revealing details that have until now remained hidden: street signs, beer glasses on a bench, people peering out from behind some curtains. The depth of the material demonstrates the artist's versatility and diverse range of interests. The exhibition is brought to Hungary by the Hungarian Estonian Institute, and the Estonian National Museum. 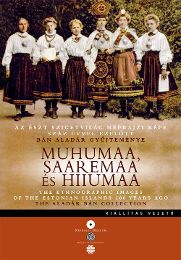 The Etnhographic Images of the Estonian Islands 100 Years Ago
The Aladár Bán collection
1,500 Ft