9/Mar/2012 - 1/May/2012
Sixty years ago, on March 9, 1952, a grandiose exhibition was opened in the former Budapest Palace of Justice - today the building of the Museum of Ethnography - on the occasion of the 60th birthday of Mátyás Rákosi.

On display were gifts made for Rákosi in commemoration of the event, including a large number of handicrafts by Hungary's folk artisans: hand-embroidered and hand-woven textiles, ceramics, carvings in wood and horn, braided whips, dolls dressed in folk attire, and samplers, along with miniature reproductions of various machines and tools.


The prodigious collection filled not only the museum's exhibition rooms, but also the second-story galleries and corridors. The present exhibition, opening on the sixtieth anniversary of the event in the hope of prompting further research on the subject, uses material from the collections of the Museum of Ethnography and Hungarian National Museum to explore this unusual "star exhibition" from the building's past. 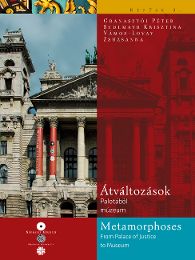 Metamorphosis
From Palace of Justice to Museum